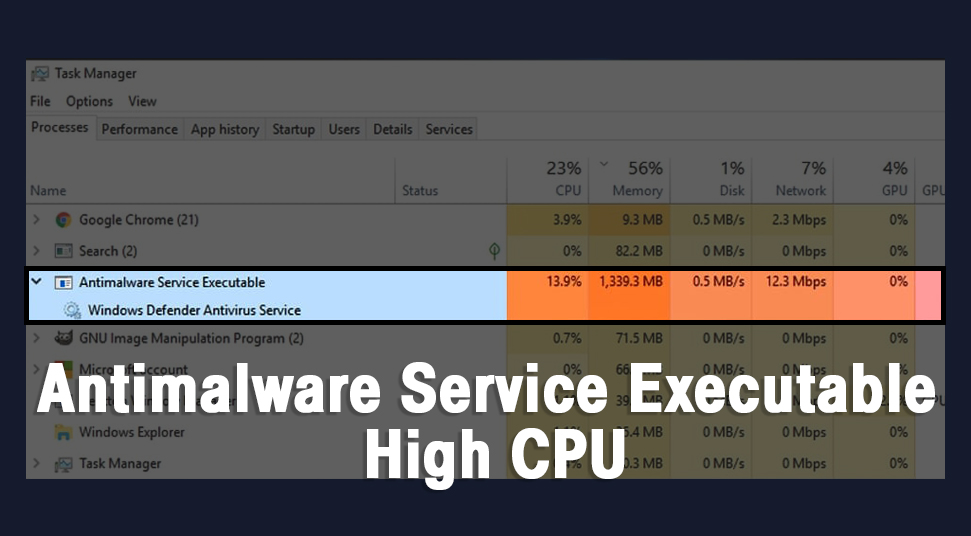 If you observed that the Antimalware service executable is taking up high CPU space, then do not worry as it is not uncommon. Many users have complained of confronting this problem lately.

Now it usually occurs due to its real-time feature and full scan feature. Irrespective of its causes, the problem can be resolved easily. To learn how to, take a quick look into the entire guide thoroughly.

What is Antimalware Service Executable?

Antimalware Service Executable or MsMpEng.exe is a background-running service of Windows Defender which helps to run malware or spyware scans on reaching them. It will also help to identify any harmful files and provide aid from any virus or worms within the system.

You can find it in the details tab of the Task Manager. It is important to note that the malware scanning of this software is dependant on the CPU of the system and thus CPU is the first thing that gets affected by it.

What to Do If Antimalware Service Executable is Taking High Disk Space?

To know the various techniques for resolving this problem, take a look into some of the fixes mentioned below.

Fix 1: Scan for Any Malware

There are chances that you are facing this problem due to any malware or virus attacks. Thus, it is important to scan for it using the inbuilt antimalware software of Windows called Windows Defender. Here is how you can scan for malware using Windows Defender.

As mentioned, the error occurs due to the real-time protection feature of Windows Defender. Thus, to change it, you can follow the steps given below.

Fix 3:  Include Antimalware Service Executable to the Exclusion List of Windows Defender

Apart from that, you can also try adding the Antimalware Service Executable to the exclusion list of Windows Defender and check if it resolves the issue for you or not. Here is how you can do so.

Fix 4: Get Rid of Bad Updates

Windows Defender has some bad updates as well and thus it needs to be removed using Command Prompt. To do so, follow the steps given below.

Many a time, the error can occur due to any corrupted files within the system. Thus, to get rid of them try running an sfc scan by following the steps given below.

How to Disable Antimalware Service Executable On Windows 10?

If the problem persists even after following the fixes above then try turning off Windows Defender and see if it resolves the issue for you. Now, this can be done either by Local Group Policy Editor or Registry. We have provided the process for both.

So these were some of the methods following which you should be able to resolve problems where antimalware service executable is taking up high CPU on your Windows 10 system.